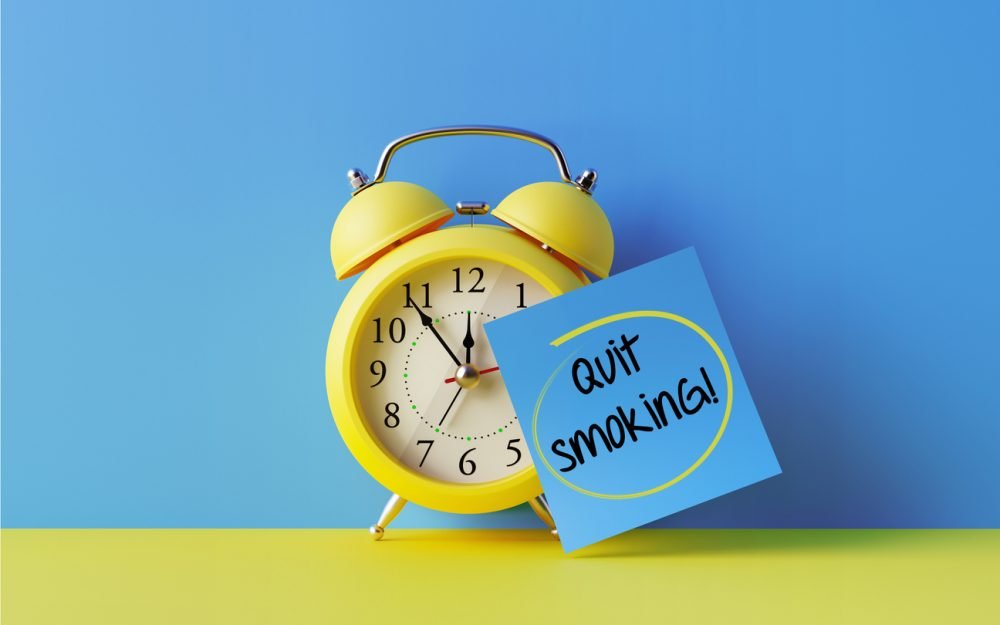 In this blog for people planning to stop smoking Robert Walton, a Senior Fellow in General Practice, and Nicola Lindson, a Cochrane editor and author, explore new Cochrane evidence on how cutting down on cigarettes before trying to stop compares with other ways of stopping smoking. Page last updated: 14 January 2022. 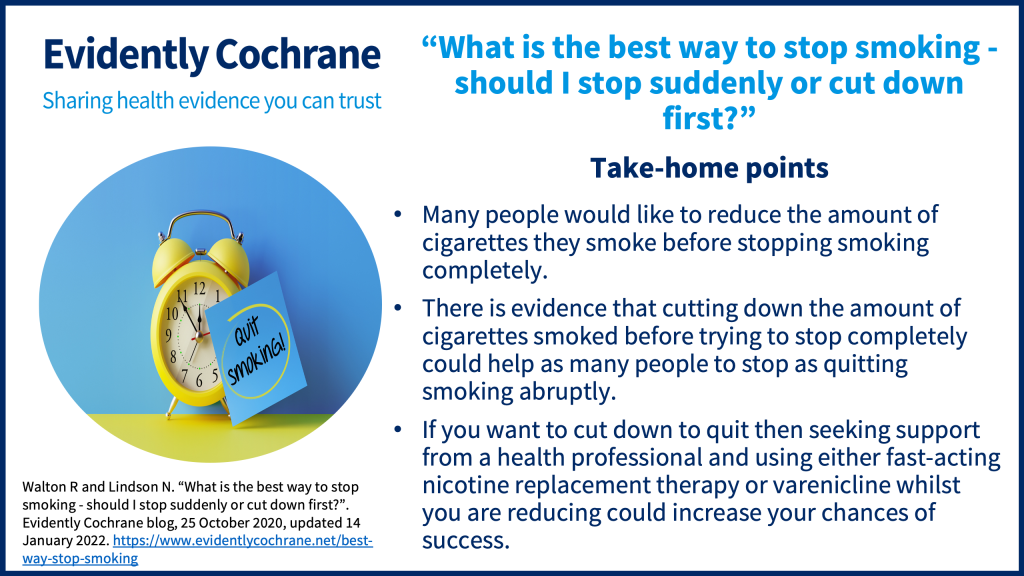 It’s a great idea isn’t it? No need to stop smoking all at once – I’ll just cut down gradually and then it will be much easier to give up completely. But is it true?

Well there is some scientific evidence from addiction biology to back this idea up.  People who smoke heavily take in more nicotine and since nicotine is a very highly addictive substance they tend to crave tobacco more and suffer more ill effects when they stop using cigarettes. It is clear that people who smoke fewer cigarettes experience fewer withdrawal symptoms when they try to stop.

Looking from a less ‘medical’ perspective, breaking down a goal that appears unachievable into small bite-sized chunks that seem within your grasp often seems to be a good strategy. About half of all smokers in the UK say that they would like to stop smoking by cutting down first, with the other half saying they would prefer to stop smoking all at once (West and Brown, 2012). The numbers are similar among smokers in the US (Shiffman et al, 2017).

However, abrupt quitting may be the only option offered by stop-smoking services, and this may push those who want to cut down first to go it alone. This is not ideal, as we know that providing people with support and medication nearly doubles the chance of success (Stead et al, 2016). Providing people with a choice between cutting down to quit and quitting all at once may encourage more people to get help to quit. But before you decide to give it a go, it’s important to know how effective this approach is likely to be.

Cutting down to quit: does it help people to stop smoking?

A new Cochrane Review on cutting down to quit smoking pulled together the evidence from 51 studies with 22,509 people (published September 2019). In all of the studies, some people were asked to cut down first before stopping (Lindson et al, 2019). Encouragingly, there was no evidence of a difference in quit rates in the 22 studies (9,219 participants) that directly compared ‘reducing to quit’ with abrupt quitting.  This suggests that people could be given a choice of cutting down to quit or abrupt quitting without reducing their chances of successfully stopping smoking.

So, what is the best way to cut down in order to quit smoking?

The review also found some evidence that cutting down to quit was more successful when people received professional support to help them quit compared to self-help. Therefore, if you want to reduce your smoking, approaching a healthcare professional such as your GP or pharmacist could be a good way forward.

If both approaches to quitting are likely to have similar success rates then perhaps deciding between cutting down to quit and quitting all at once should be left to each individual to make up their mind. We are all different and what works for one may not work for another, and of course people who have tried many times to quit abruptly may want to try a new approach.

Whichever way you choose, the evidence suggests that seeking support and using stop smoking medications to help you will improve your chances of quitting and staying smoke-free in the long-term.

Good luck with your resolution to stop smoking!

Join in the conversation on Twitter with @rtwalton123 @CochraneUK @CochraneTAG or leave a comment on the blog.

Read more blogs about the evidence on quitting smoking.

Nicola Lindson is the Managing Editor of the Cochrane Tobacco Addiction Group (TAG). Her salary is funded by an NIHR Infrastructure grant for the Cochrane TAG via the University of Oxford. The views and opinions expressed therein are those of the authors and do not necessarily reflect those of the Systematic Reviews Programme, NIHR, NHS, or the Department of Health and Social Care.

What is the best way to stop smoking – should I stop suddenly or cut down first? by Robert Walton