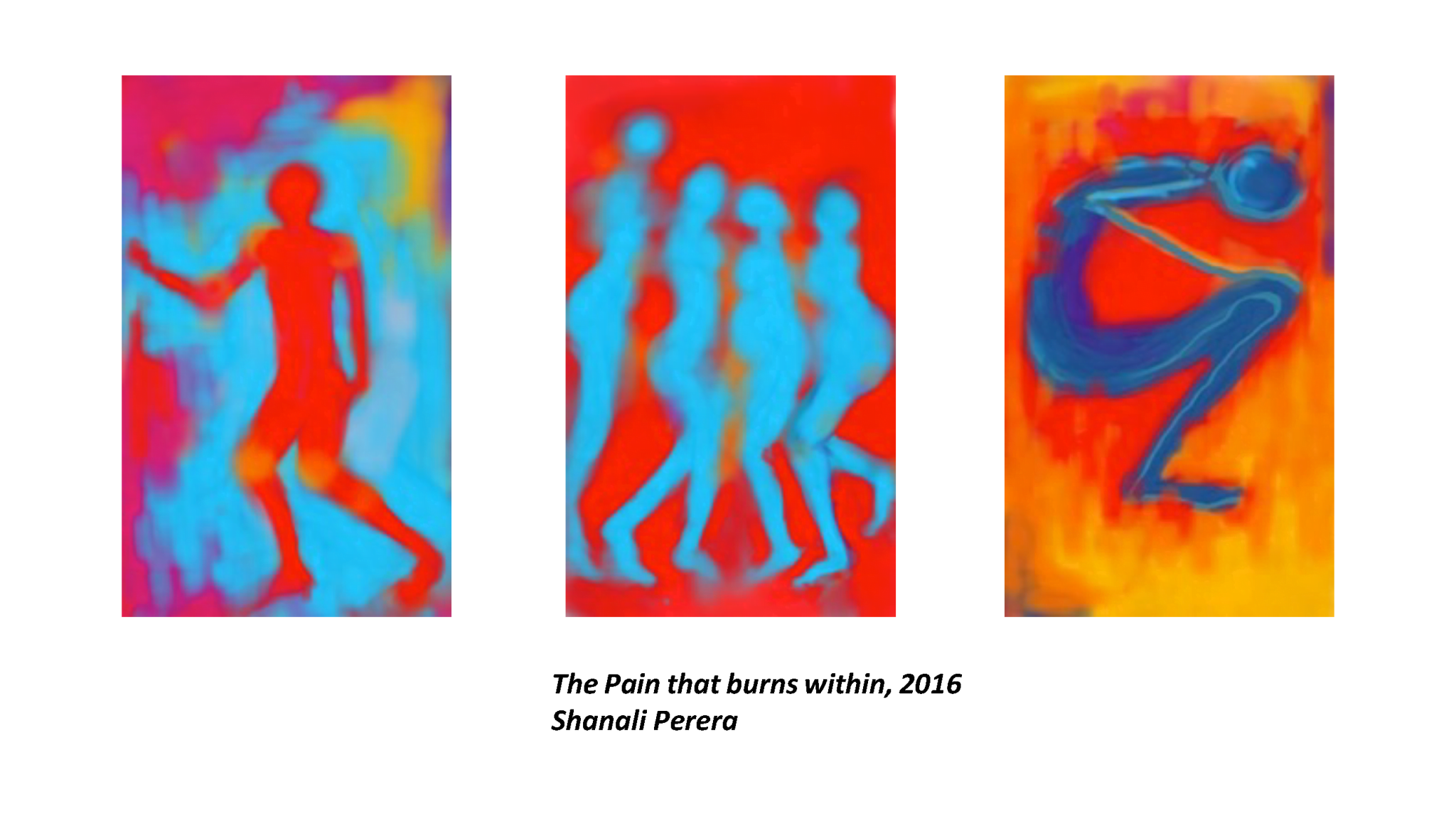 In this blog for people with severe arthritis Robert Walton, Senior Fellow in General Practice at Cochrane UK and a very general practitioner, examines Cochrane evidence about biologics – a new generation of drugs to help people with this disabling long term condition. 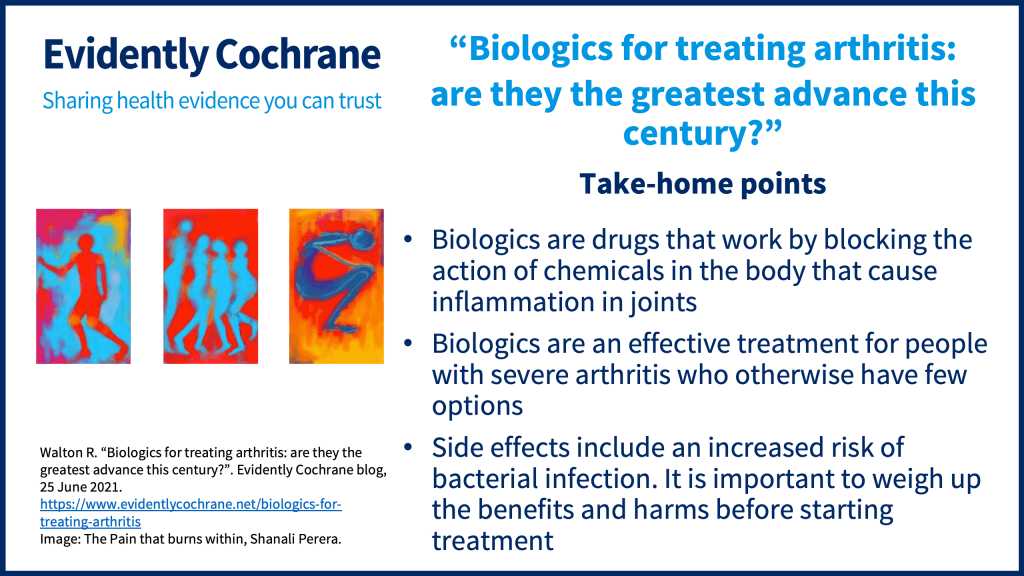 It’s a common interview question for junior doctors “What’s the most important advance in medicine in the last 20 years?”.  Bespectacled old fogey then smiles triumphantly and relaxes back into the chair while the nervous candidate stammers out a list of treatments hoping one of them will be foremost in the interviewer’s mind.  A curious way to select doctors perhaps but an important question nevertheless. Only by looking at the past can we gain some glimmer of insight into what may be possible in the future.

Whilst there is still some way to go there have been remarkable advances in management of long-term conditions causing inflammation of the joints.  The advances have come from a deeper understanding of the mechanisms by which tissues are damaged by the inflammatory process.  The drugs are somewhat awkwardly named ‘biologics’ because they are made by persuading cells of the immune system to create antibodies to the chemical messengers which cause damage to the tissues.  These biologics then either remove the chemical messengers from the bloodstream or block the effects on receptors that are necessary for them to cause inflammation.

As you might expect, there are many different kinds of these new drugs and they are used in a range of different conditions. This blog focuses on Cochrane evidence on biologics for people with arthritis.  These drugs have revolutionised the lives of many with the more serious forms of arthritis. Remarkable advances in this area seem set to continue.

Initially brought to market in the late 1990s for the treatment of Crohn’s disease, infliximab was the first biologic used for rheumatoid arthritis a few years later.  To this date, disease-modifying drugs that non-specifically suppressed the immune system such as gold, sulphasalazine and methotrexate had been the only options for treatment.  Whilst these drugs were partially effective, there was a risk of severe and predictable unwanted effects. This limited their use in practice.

A Cochrane Review from that time (2002), summarised the evidence for the new biologic therapy Infliximab for the treatment of rheumatoid arthritis (July 2002). People taking methotrexate and infliximab had an increased chance of their disease responding to treatment than those taking methotrexate alone. Importantly this was associated with reduced chance of long-lasting damage to joints. The treatment offered new hope to people who had little benefit from conventional treatments or who experienced intolerable side effects.

Benefits from biologics for arthritis are not confined to rheumatoid disease. The Cochrane Review TNF‐alpha inhibitors for ankylosing spondylitis (April 2015) found that people with ankylosing spondylitis, which is a painful and disabling arthritis affecting the spine, were three to four times more likely to achieve a response when treated with a biologic compared to a placebo. In addition, those taking a biologic are six times more likely to achieve partial remission of their disease when compared to those taking placebo

All this comes at a cost however. People need to balance the benefits against the risks of biological therapies for arthritis.  It is important to weigh up the possible benefits and harms that are likely to occur when making decisions about taking a new treatment.  A Cochrane Review of randomised trials, Adverse effects of biologics: a network meta‐analysis and Cochrane overview (February 2011), showed that rates of serious bacterial infections were increased. Although some really important side effects are very rare, so randomised controlled trials which are often small scale and conducted over a relatively short period of time may not be the best way to identify these.

Sad to say though that the advances in treatments for severe inflammatory arthritis have not been carried forward to osteoarthritis, which is the commonest form of arthritis.  This is because the disease mechanisms in osteoarthritis are different to those in rheumatoid arthritis and ankylosing spondylitis.   As the population ages, osteoarthritis will be an increasing problem. With greater understanding of the disease processes my hope is that an effective new treatment will be developed – a novel biologic perhaps?

However economic considerations are a major factor in the use of the new biologics – tens of thousands of pounds for a year’s treatment is a hefty price tag.  Nevertheless, biologics are available on the NHS for people with severe disease who have either not responded to – or have not been able to take – conventional treatments because of side effects.  The drugs are prescribed by hospital consultants who will first make a careful and accurate assessment of the severity of the disease.  The economics of these new treatments will change as ‘biosimilars’ become available.  Biosimilars are newer versions of the original medicine usually sold at a lower price.  There’s a helpful summary about biologics, biosimilars and the diseases that they are used to treat on the NHS web page Biological and biosimilar medicines (biosimilars).

So “biologics for arthritis” would seem to fit the bill as a winning answer to that interview question – so long as the old fogey with the spectacles thinks so too!

Join in the conversation on Twitter with @rtwalton123 and @CochraneUK or leave a comment on the blog.

Biologics for treating arthritis: are they the greatest advance this century? by Robert Walton