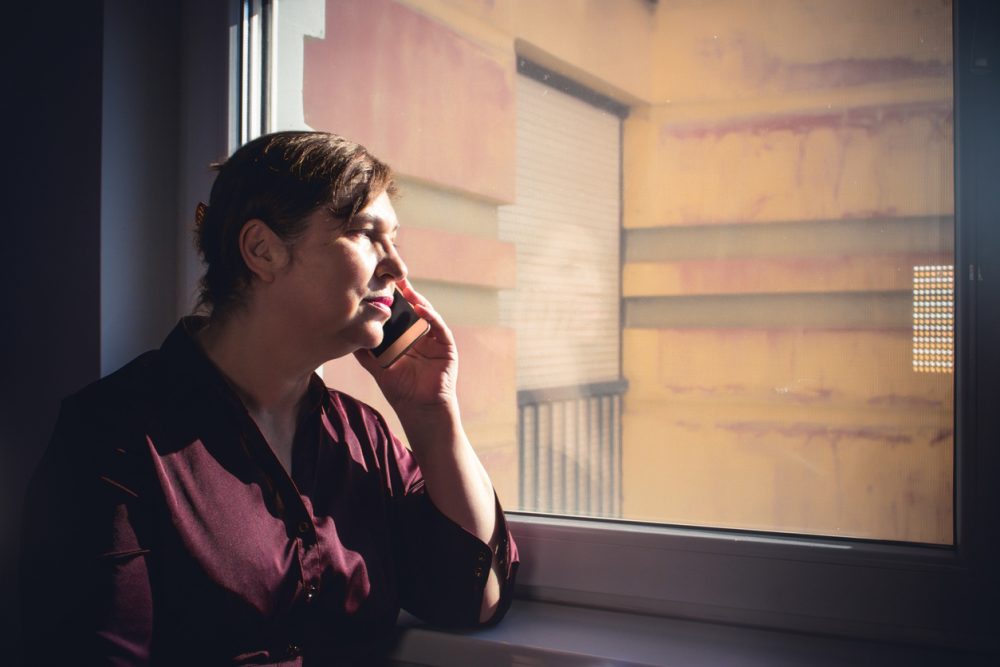 It’s Carers Week and this year the theme is ‘Getting Carers Connected’. Karen Morley reflects on the lack of connections for her when she was caring for her mother, looks at the evidence for telephone support and support by other modes, and gives a snapshot of her life as a carer, in four phone calls.

In the UK alone there are around 7 million informal (unpaid) carers, saving the economy £132 billion a year, according to the Carers Trust. In a 2018 State of Caring survey carried out by Carers UK, 72% said they had suffered mental ill health, and 61% physical ill health as a result of caring.

Carers take on a huge range of tasks including shopping, cooking, cleaning, organizing finances, appointments, medication, visits and providing personal care and companionship. While I was caring I used ironically to sing, in my best cartoon mouse voice, the Work Song from Disney’s Cinderella.

Carer support: a Cinderella in research?

It seems we’re still among the Cinderellas of the kingdom of research. Talking to Sarah Chapman at Cochrane UK about Cochrane Reviews on ways to support carers like me, it emerges there isn’t very much.* Here’s what she found:

Telephone support for carers of people with a range of conditions

“A Cochrane Review published in May this year, explored the effects of telephone support and information, given by health professionals to informal carers of people (mostly members of their family) with a range of diagnosed conditions. It has evidence from 21 randomised controlled trials (RCTs) with 1,690 carers. Most compared telephone support with ‘usual care’.

The review authors found that telephone support probably makes little or no difference to caregiver quality of life and may have little or no effect on caregiver burden. It may slightly reduce anxiety and slightly increase in preparedness to care, but the effect on depression is uncertain. There was no evidence of an effect on most of the things they measured (such as knowledge and family functioning).  It’s unclear how it compares with other types of professional support and while six studies looked at carer satisfaction with the support they received (and all reported high satisfaction) none of the studies measured or reported ill-effects.

Three other reviews looked at support for carers of people with dementia. A 2014 Cochrane Review looked for evidence on both the effectiveness of telephone counselling and carers’ experiences of it . The bottom line is that the impact of telephone counselling on carers of people with dementia remains uncertain, in terms of both benefits and harms.

The other two look at alternative modes of support. A 2018 Cochrane Review on mindfulness-based stress reduction (MBSR) for family carers of people with dementia found, from five small studies, “low‐quality evidence suggests that MBSR may reduce carers’ depressive symptoms and anxiety, at least in the short term.” Again, any harms are unknown and mostly unlooked for and both these reviews note the lack of investigation into the impact on the people being cared for.

Snapshots of a carer’s life in four phone calls

This is thin fare for carers worldwide hoping for connections with evidence-informed support. This has led me to reflect on the lack of connections in my years as a carer for my mum. She had mixed dementia along with several other health conditions, including arthritis which resulted in poor and decreasing mobility.

I have so much to say about the isolation, the lack of joined up healthcare, the underfunding, the absence of anyone with an overview, the ‘signposting’, the library of booklets and leaflets, the unacceptable waiting lists, the unwanted and inappropriate advice, the pointless devices (tea trolleys, anyone?) and sometimes the sheer insensitivity of people I dealt with. But we’d be here all week. 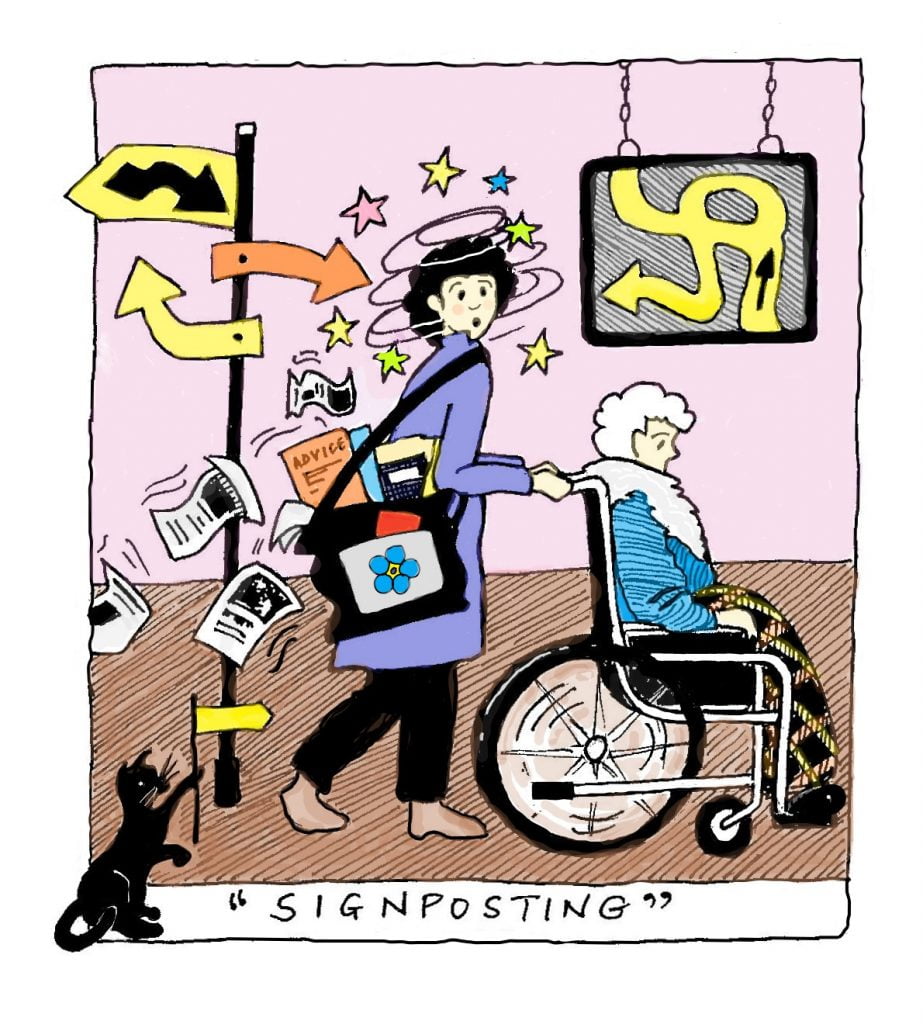 ‘Signposting’ for carers? By Karen Morley.

So I thought, since it’s been mentioned, that I’d focus on my experiences of telephone support from health and social care workers: four snapshots of a carer’s life in four telephone calls. They don’t reflect my entire experience. I have met some sensitive, compassionate and truly professional people. But they might show you why I’m angry myself and on behalf of others.

Telephone support: is it really ‘convenient and trouble-free’?

In the reviews above, some optimistic claims are made for telephone support. The background section of the recent review suggests ‘It is an easily accessible method of providing support irrespective of geographical location’. ‘Telephone support was a convenient and trouble‐free means of providing support to caregivers of people with dementia’ concluded a qualitative study (Salfi, Ploeg and Black, 2005) quoted in the Cochrane Review (Corry et al, 2019). However Salfi also captured the shortcomings perceived by some carers and the ‘helplessness and frustration’ felt by some telephone support providers:

Over the phone, there’s only so much I can do to really help someone. I can’t be there if someone is extremely agitated or repeating questions over and over. And I can hear it in their voice that they’re just at the end of their rope—the caregiver. I feel somewhat limited in what I can really offer them. You know, I can talk to them and I can listen to them and maybe make them feel a little bit better for the moment, but then they hang up and they’re still in that situation.” (Salfi, 2004).

Some harsh realities of being on the receiving end

My situation made it very difficult to take telephone calls. I lived with my mother and very soon after her diagnosis she became extremely delusional, hostile and paranoid. She believed I meant to poison her, was stealing from her and had threatened to kill her. She was suspicious of everything I did and at the time was able to follow me around, leaning on her walking stick. In emergencies I had to hide in the garden, keeping an eye open for her, or make up pretexts to leave the house so I could take calls in the street. The unpredictability of calls was a nightmare: I had my phone on silent, constantly in my pocket, set to vibrate.

Mum started to try to imprison me in my room by tying up my door handle, then to refuse to let me back into the house, putting on the security chains. On one particularly challenging occasion I turned in desperation to a charity whose telephone number I had. They couldn’t help me. I tried a nurse at the memory clinic who had given me her number after she had discharged us back to our GP (a long and unedifiying story). She suggested leaving her for a while then trying again, as mum might have forgotten. (Her behaviour had persisted over days.) ‘If not, it’s the police, I’m afraid.’ Imagine the impact on my mum and on our relationship, and the scenes in our street. Luckily after an hour or so a neighbour bravely agreed to accompany me to the house and I managed to slip inside with her. I had keys cut and, on tenterhooks, unscrewed the security chain from the back door in the dead of night so I could get in via the garage. I’d make a really terrible undercover agent.

There was an unforgettable call with Social Services after I tried vainly on several occasions to make an appointment for my carer’s assessment. My relief when I got through was short lived. ‘What you have to understand is,’ she said severely, ‘you are fifty-fourth on a waiting list.’

I gulped. Fifty-fourth? How long would that take?

‘I can’t tell you that! New people might be added to the list ahead of you because their needs are greater than yours!’ 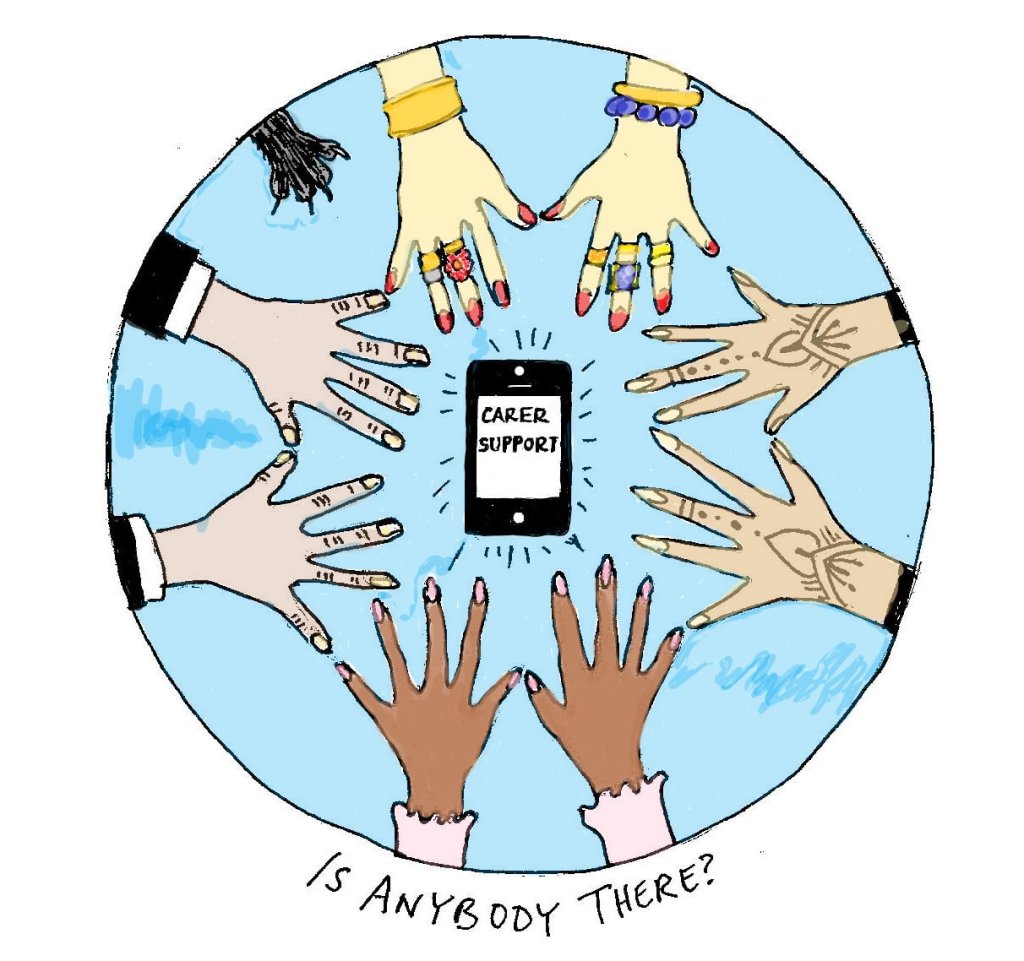 Carer support: is anybody there? By Karen Morley.

I think, having heard my story, that it was my mum’s psychiatrist and CPN who kindly advocated for me on this occasion, as not long after I was offered, and accepted, a prearranged telephone assessment. This one took place on a street corner in freezing cold weather. I had to share deeply personal information in a public place.

I must say here, that when we moved house to the city, I had a face-to-face assessment with an experienced, energetic, empathetic woman who became my Carer Support Assistant. The difference was immeasurable. And she actually provided genuine support relevant to my situation. But that support was dependent on local authority funding, which is being cut…

During her absence owing to illness I was offered priceless advice by someone at Adult Social Services when my mum was no longer able to use her bath lift and there was an eleven week waiting list for care. How should I wash mum, who was becoming much less mobile and found it hard to stand at the sink for long? By this time I had contamination OCD and was finding personal care very challenging. ‘It’s common sense,’ she said, briskly. ‘Sit her on the toilet and wash her down. Hindquarters last.’ I wonder if this gem is the training that care companies give paid carers. I leave it here for you, in case you ever need it.

Finally, and most distressingly, my call with someone at the District Nurses’ office. I don’t know who it was. Our GP had told me that probably mum was at the end of her life. We agreed to stop most of her medication. He said she would need end of life care and I called to ask her how this would be done. She was astringent. ‘Your mum doesn’t need end of life care! You’re managing, aren’t you? She’s not being sick or anything?’ I found out later that our GP was away on a three week holiday. I should have followed up the call. But I was tired and beaten down and I didn’t.

The evidence map is often not the territory

In conclusion, where there is evidence, the map is often not the territory. Telephone support is only as good as the person at the other end of the line. It might not be useful or convenient (except, perhaps, to the institution making the call). It might be difficult, impersonal or even insensitive. It doesn’t reveal what’s unspoken. It’s remote, geographically and emotionally. I’d love to have been able to look into the eyes of some of my callers and see if they could hold my gaze. It might have made a difference.

So, yes, in UK Carers’ Week, let’s get carers connected. To evidence that meets their needs. To genuine, practical support from skilled specialists. To a named professional who can coordinate their loved one’s care. Let’s fund the health and social services and connect them so they can communicate effectively. Let’s turn them into destinations, not signposts. Let’s care for our carers, who save us billions of pounds, at the risk of anxiety, depression and other avoidable health conditions. We know they deserve it. All it takes is the political will.

And there lies the biggest barrier of all.

Join in the conversation on Twitter with @KMorley9 @carersweek @CochraneUK or leave a comment on the blog.

*There are other Cochrane Reviews on support for carers of people with other conditions, such as stroke. These are given as further reading in the reference list.

Karen Morley has nothing to disclose.

I am a retired secondary school teacher, a Cochrane Consumer and a volunteer with the Cochrane Common Mental Disorders Review Group. I have contributed to the creation of Cochrane Evidence Essentials, to the CCMD Voice of Experience College, am an occasional blogger, have written consumer peer reviews - and I am a Cochrane author. I have lived experience of Obsessive Compulsive Disorder (contamination).

Carer at the end of the line: evidence and experience of telephone support by Karen Morley