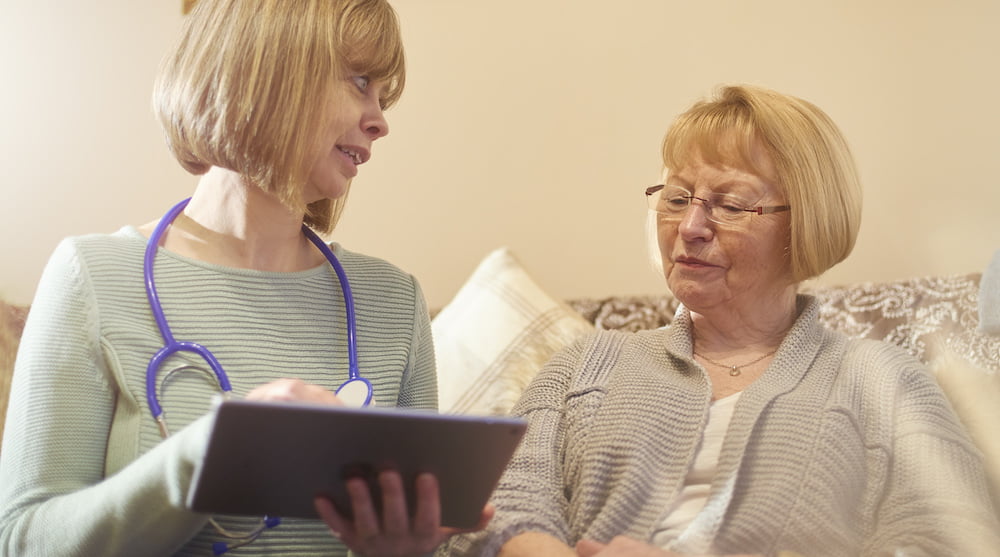 In a blog for members of the public and the professionals who care for them, Terry Quinn and Jenni Burton summarise the findings of a series of Cochrane reviews describing a structured questionnaire that is used to help identify possible dementia. The questionnaire is called the IQCODE (Informant Questionnaire for COgnitive Decline in the Elderly).

Receiving a diagnosis of dementia is a life-changing experience. Patients and their families rightly expect that if this diagnosis is made, then the diagnosis is correct. However, making a diagnosis of dementia is not easy and many with the early stages of the disease remain undiagnosed. A dementia diagnosis should always be made by a trained professional based on the person’s symptoms, signs and the results of tests. These tests can range from sophisticated brain scans to more simple pencil and paper memory tests. Dementia involves progressive changes in memory and thinking. Sometimes these changes are not obvious to the person affected and so, useful information can come from family, friends or carers. Structured questionnaires have been created that ask informants about changes that could signify dementia. The most commonly used of these is the Informant Questionnaire on Cognitive Decline in the Elderly, or IQCODE for short.

The usefulness of tests for dementia will depend on the context in which the test is being administered. In the Cochrane Dementia Group we were keen to assess how dementia tests performed in a variety of different health care settings. To illustrate our reviews on IQCODE we thought we would tell the story of one person’s dementia diagnosis journey. So, let’s consider Mrs Cochrane…..

Mrs Cochrane is a 72 year old retired librarian. She lives in a bungalow with her partner Mr Cambell. They keep in relatively good health and enjoy a busy social life.

IQCODE for diagnosis of dementia in the community 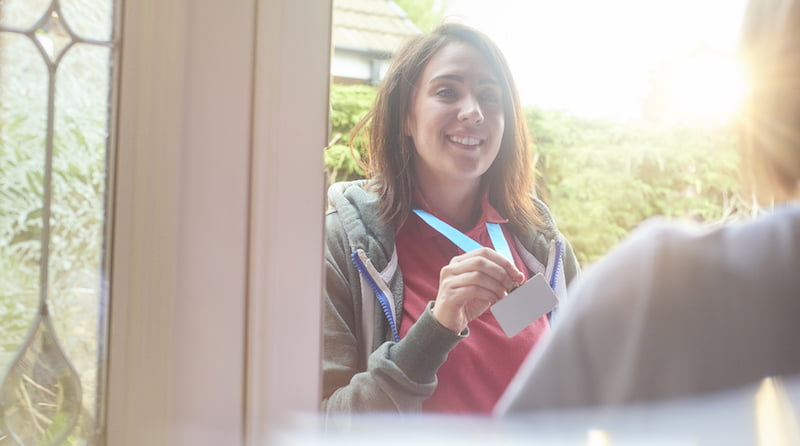 A young researcher at the door

Mrs Cochrane is an engaged citizen scientist, who has been enjoying helping with online activities such as the Cochrane Crowd initiative (crowd.cochrane.org). Mrs Cochrane pays a visit to the website that shares her name and finds that the Cochrane Dementia Group has a review on the usefulness of IQCODE when used with older adults living at home.

In this particular review there are eleven studies including 2644 individuals. Many of the review findings are reassuring. A short (16-question) version of IQCODE seems just as good at diagnosing dementia as the original, longer (26-question) version – the less time filling out questionnaires the better. As she lives in a multicultural area, she was also pleased to see that IQCODE is available for use in various languages and the language used for assessment does not seem to compromise the accuracy of the questionnaire.

However, she is surprised that the studies included in the review use IQCODE in different ways. In particular it seems that there is no consensus on the IQCODE score that signifies a ‘positive’ test. She also notes that although the studies were all carried out in ‘community settings’, many have a particular focus on selected groups of people, for example people who have survived a stroke. With this in mind she is careful about how she interprets the summary of IQCODE accuracy.

The review suggests that in a group of people with dementia, IQCODE would make the correct diagnosis in about 80%. Mrs Cochrane is concerned about what might happen to the incorrectly diagnosed. What if she were the one in five people with a ‘positive’ IQCODE score who did not actually have dementia? The thought of having to go to a clinic for more memory tests or scans was a worry. She decided that when the researchers returned tomorrow she would help with their questionnaire but not ask Mr Campbell to complete the IQCODE section.

IQCODE for diagnosis of dementia in primary care

Later that year Mrs Cochrane attends her General Practice surgery for a medication review. After the consultation, the doctor asks: “While you’re here Mrs Cochrane, would you mind taking home this questionnaire (IQCODE) for your partner to complete?” The doctor explains that the surgery had been identified as having a low rate of dementia diagnosis. To improve things they were targeting older people attending the surgery to try and diagnose early memory problems. “It’s a simple questionnaire and may help put your mind at rest”.

Mrs Cochrane accepts the questionnaire, but her mind is far from restful. She again investigates the evidence around IQCODE and finds the Cochrane review looking at IQCODE in primary care. There was only one study and this was conducted in Hawaii. Mrs Cochrane wonders if a study concerned with Japanese Americans would be relevant to her situation. With only one published study, the Cochrane reviewers were unable to provide any guidance on the usefulness of the IQCODE in General Practice. She decides that, on balance, it may be best not to complete the IQCODE. Rather, she encourages Mr Campbell to dig out the passports, as a trip to Hawaii sounds very appealing.

IQCODE for diagnosis of dementia in secondary care

A couple of months later Mrs Cochrane has a fall in the garden. Mr Campbell phones an ambulance and they are taken to the local hospital. While Mrs Cochrane has x-rays, Mr Campbell is approached by a doctor who wants to “ask a few questions about your partner’s memory”. The doctor explains that it is hospital policy that everyone aged over 65 is assessed for memory problems and so an IQCODE is completed. A couple of weeks later Mrs Cochrane receives a letter inviting her to attend the outpatient Memory Clinic to follow-up on her ‘abnormal’ IQCODE results. She curses Mr Campbell and goes straight online to check out the Cochrane review of IQCODE in a hospital setting. ().

The review collates information from 13 studies, totalling 2745 people. In common with the other IQCODE reviews, Mrs Cochrane decides that not all the included studies are directly relevant to her situation. Interestingly, IQCODE seems to perform better when used in general settings, than when used in specialist memory wards. She also notes that the review authors questioned the quality of a number of the included studies. In particular, certain studies may have preferentially selected patients for whom IQCODE would work well.

Accepting these caveats, she carefully reads the summary analyses in the review. When used in hospital, IQCODE seems good at picking up people with dementia but it runs the risk of also picking up (and misdiagnosing) many people who do not have the condition. In hospitals the IQCODE may be most useful when the result is negative as this helps ‘rule out’ possible dementia. So, although she has a ‘positive’ IQCODE it was still very possible that Mrs Cochrane did not have dementia.

One month later, Mrs Cochrane has completed in-depth memory assessments with a psychologist; has undergone an MRI brain scan and a series of blood tests. At the memory clinic the Consultant reassures her that her memory is in good health, in fact her memory and thinking were better than most people of her age. “It is probably all that online Cochrane Crowd work that you do” remarks the Consultant. Of course, Mrs Cochrane is familiar with the Cochrane reviews of treatments to prevent dementia and she knows that there is no good evidence (yet) that online activity maintains memory.

No dementia test is perfect

Mrs Cochrane’s story is fictional, but the issues raised are very real. No dementia test is perfect and thought must be given to the implications of a ‘false positive’ or ‘false negative’ result. These issues are particularly relevant in countries that are instituting primary care ‘case finding’ or hospital based screening.

The lack of information on the use of IQCODE in primary care is a particular concern as arguably the test is well suited to this setting and increasingly General Practitioners are being asked to look for dementia. The papers included in the Cochrane reviews focus on the accuracy of IQCODE. To get a complete picture of how well the test works it would be useful to see research on other aspects of IQCODE, such as feasibility (can the test always be completed, do people always have an informant); acceptability (do people want the test, what do they understand about the test) and economics (what are the emotional, financial and time related costs of misdiagnosis).

IQCODE is only one a number of tests used to help clinicians make a dementia diagnosis. For those interested in the area, the Cochrane Dementia group are working to summarise the accuracy of all the various tests available.

Do join in the conversation on Twitter with @DrTerryQuinn @JenniKBurton  and @CochraneUK #dementiaspotlight or leave a comment on the blog.

Terry Quinn reports grants from The Stroke Association, from null,  outside the submitted work. Jenny Burton has nothing to disclose.

Dr Terry Quinn is Stroke Association / Chief Scientist Office Senior Clinical Lecturer based in the Institute of Cardiovascular and Medical Sciences, University of Glasgow. Terry has a broad research portfolio, his principal research interests are trial methodology, functional/cognitive assessment and neuropsychological consequences of cardiovascular disease. Recent notable outputs include co-authoring best practice guidance for test accuracy studies in dementia; creating online training for stroke trials and developing short form assessment scales. Terry has published extensively on stroke, cognition and test accuracy. He is Principal Investigator for a number of studies and holds a program grant to look at cognitive outcomes following stroke. Terry has editorial board positions with PLOS, Frontiers and Stroke , including coordinating editor of the Cochrane Dementia Group. He is part of the NIHR Complex Reviews Support Group and is founder and co-chair of the Scottish Care-Home Research Group. Terry’s work has always maintained a clinical focus and he combines research activity with teaching and clinical commitments in the wards of Glasgow Royal Infirmary. Email: [email protected] Twitter: @DrTerryQuinn URL: http://www.gla.ac.uk/researchinstitutes/icams/staff/terryquinn/