In this blog for people with endometriosis, Claire Barker, who has been involved in endometriosis research as both a participant and a researcher, shares her experiences of using hormonal contraceptives for her endometriosis pain, and Dr Martin Hirsch, Locum Consultant Gynaecologist at Oxford’s John Radcliffe Hospital, discusses the latest Cochrane evidence. He reflects upon the side effects and effectiveness of these widely used treatments for pain associated with endometriosis.

This blog is the sixth in our #MyEndometriosisQuestion series running throughout March, with blogs about endometriosis and an invitation to ask your questions, which a panel of experts have been addressing throughout the month.

Featured image: ‘Cramps and spasms in my abdomen’ by Margaret Kalms* www.endowomanart.com 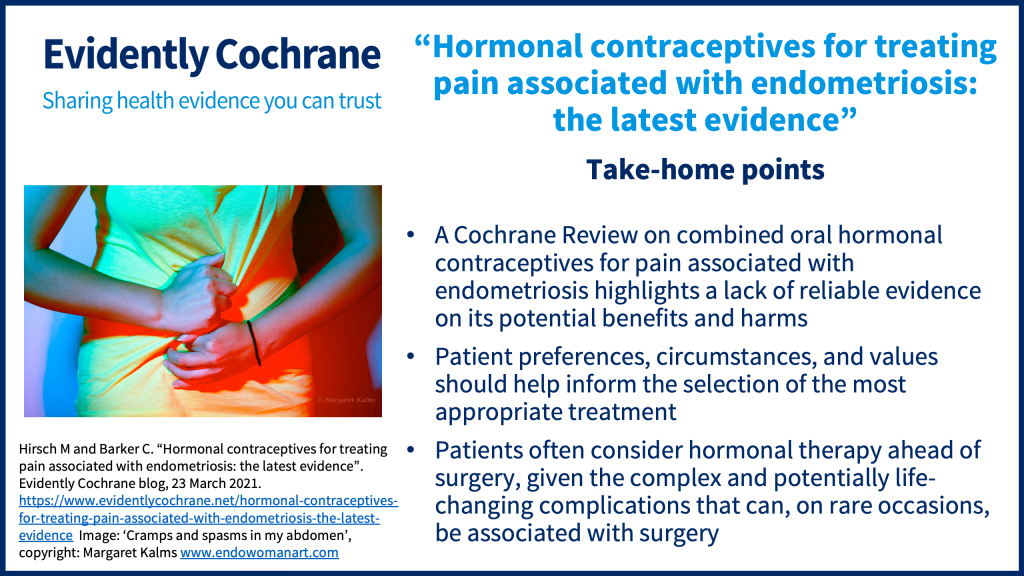 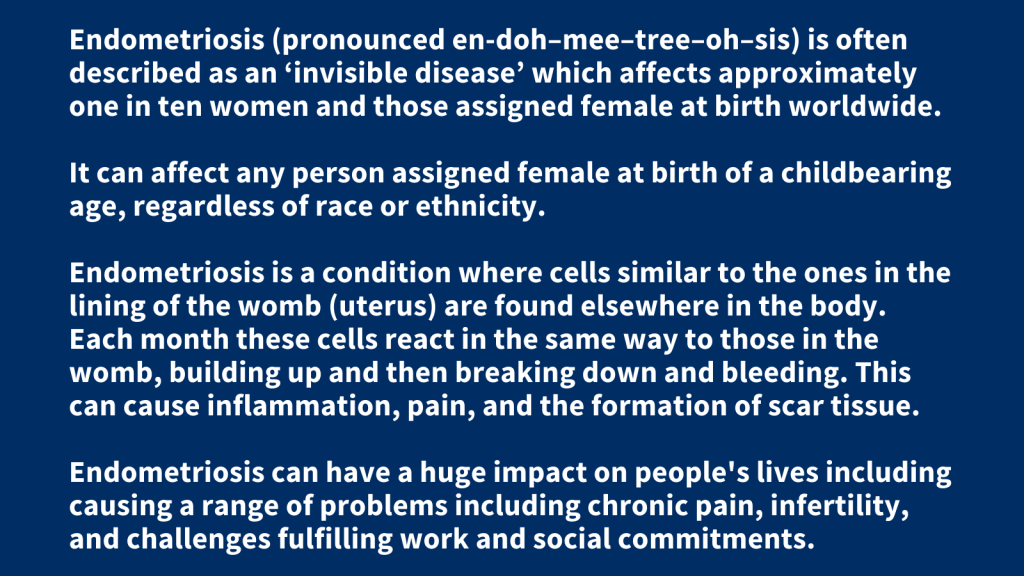 From the day I started my periods, aged 11, they were excruciatingly painful. I vividly remember being awake all night in the shower sobbing with pain and being bent double gasping for breath in lessons at school. The pain would radiate throughout my abdomen, down my legs and into my lower back, leaving me incapable of doing or focusing on anything else. Looking back this was clearly a big red flag, but painful periods run in my family and I thought it was normal but that I was just unlucky.

After repeated visits to my GP, I was prescribed the combined oral contraceptive pill in my early teens. This seemed like a good option at the time as the combined pill seemed a familiar medication and taking it a low-risk strategy. It was certainly worth a try as a first port of call when I was in so much pain. The relief was stark and immediate, and I was grateful to be able to lead a much more normal life – going to school and participating in my beloved extracurricular activities like sport and drama. My periods were still more painful than my peers, but with ibuprofen and a hot water bottle they were manageable.

A huge benefit of this medication was being able to take it ‘back to back’ when required, thus preventing several important exams and holidays from being ruined by my period. However, the pill did little to prevent the increasingly debilitating fatigue I had experienced since puberty – a particularly nasty symptom of the endometriosis which I had not yet been diagnosed with.

While at university I started to experience random bleeding outside of my period, as well as bloating, and pain in my bowel and right shoulder. It was a really frightening and confusing time. These symptoms prompted a referral to several hospital specialities for testing and led to an eventual diagnosis of stage four endometriosis, 14 years after my symptoms first appeared. The disease was found in a wide number of places within my body including my ovaries, bowel, bladder and diaphragm.

At this time, I came off the combined oral contraceptive pill as I decided to opt for a surgical route for treatment instead. I had two reasons for making this decision to come off the combined pill. Firstly, I was hoping to try for a baby, as my endometriosis had made me anxious about my fertility and hormones obviously impede this process. Secondly, the combined pill had stopped having much of a pain killing effect anyway by this point, so I was now willing to try a more radical route through surgery to relieve my pain symptoms.

Overall, I did find the combined oral contraceptive pill useful for helping me to manage my endometriosis pain. I know many people with endometriosis who I have met through my support group and advocacy work have found it helpful if they have been reluctant to have surgery or try more invasive methods like the Mirena coil. However, sometimes I wonder whether the hormones were just masking the disease as it grew worse inside me, and the benefits reduced the more severely my endometriosis developed. 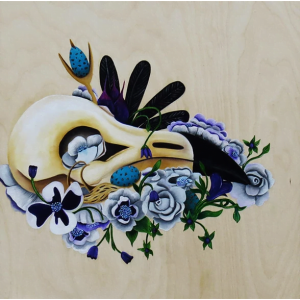 ‘What will you take next?’ is by Amanda Adkins* @amanda_adkins_art, who said: “I feel endometriosis has taken so much from my life. I painted this in a vanita style to show life is fleeting”.

What research evidence is available on hormonal contraceptives for pain?

What are the side effects?

The evidence highlights that side effects from hormonal contraceptives may occur more than those who take placebo. The side effects reported include abnormal vaginal bleeding and nausea. When they compared the combined contraceptive pill with Goserelin, the side effects were comparable with the exception of hot flushes which occurred more commonly in women taking Goserelin.

Uncertainties remain about whether combined oral contraceptives are effective

After systematically reviewing the evidence, the review authors concluded there was insufficient evidence to make a judgement on the use of the combined oral contraceptives for the treatment of pain associated with endometriosis. There may be little to no difference in improvement comparing the combined contraceptive pills with other medical treatments such as Goserelin.

The number of patients globally who receive hormonal contraceptive treatment for pain associated with endometriosis is vast. Yet these treatments have been tested on just over 400 women in low-quality research. It is important to note that this does not necessarily mean that the treatments are less effective, however it means that more, high-quality research is needed to be certain of the effects. It is important that research in this area receives more funding.

In my personal practice I try to focus on achieving symptom-based priorities in partnership with patients, rather than eradication of the endometriosis. These goals can be pain control during a period, pain with intercourse, or pain with opening bowels. Many patients, like Claire, have concerns that medical treatments may mask the endometriosis symptoms rather than treat it. Unfortunately, we still know very little about the natural history of endometriosis and whether medical treatments allow the disease to grow while silencing the symptoms. This has been hampered by the invasive nature (surgery) of diagnosing and monitoring the condition.

I find combined hormonal contraceptives work well for a proportion of patients and I tend to recommend them initially as the risks of serious harm are less compared with surgery. I always want to ensure there is a follow up appointment as I know that not all patients will respond and see a benefit. In these cases, I would discuss the merits a different hormonal preparation versus the option of surgery.

For those patients I see where pain during a period is their principal symptom, I also discuss the option of using a medicine like ibuprofen. Despite there being a lack of high-quality evidence on ibuprofen, and drugs like it, it appears to work well and has been used for a long time. They can cause more side effects than paracetamol and it is recommended that patients discuss medication with their doctor before starting it.

Questions to ask your pain specialist

Support for people with endometriosis

There is a vibrant online community of women with endometriosis, commonly known as #endosisters, who share knowledge and offer support, along with charities such as Endometriosis UK and grassroots organisations such as Fair Treatment for the Women of Wales.

Claire Barker and Martin Hirsch have nothing to disclose.

*Images used with permission and cannot be reused without permission from the artists. 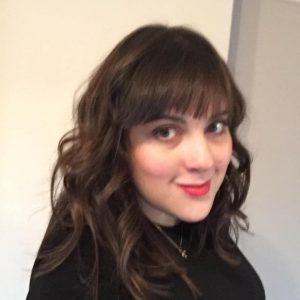 Claire Barker has been diagnosed with endometriosis for seven years having suffered symptoms since puberty. She runs a successful endometriosis blog called ‘The Endo the World’? And tweets as @EndoLadyUK. She also helps to run the Hertfordshire support group for Endometriosis UK.

Join in the conversation on Twitter with @EndoLadyUK, @MartinHirsch100 @CochraneUK and @CochraneCGF or leave a comment on the blog.

Dr.Martin Hirsch is a locum consultant gynaecologist at Oxford’s John Radcliffe Hospital. He works as a full-time gynaecological surgeon specialising in excisional surgery for women with endometriosis. In a research setting he works collaboratively with patients and other endometriosis experts to try and improve diagnosis and treatments for endometriosis associated pain and infertility. Martin was awarded a post graduate Medical Doctorate research degree from Queen Mary University of London for his progressive work on evaluating different diagnostic tests and treatments for endometriosis. He has published widely in the area of endometriosis including the development of a recent core outcome set. His research portfolio includes 41 published items in the field of endometriosis, attracting over 600 citations from other researchers. He presents this work regularly at national and international conferences with national recognition awards from NHS improvement, The British Society of Gynaecological Endoscopy and Health Education England. Martin Tweets at @martinhirsch100