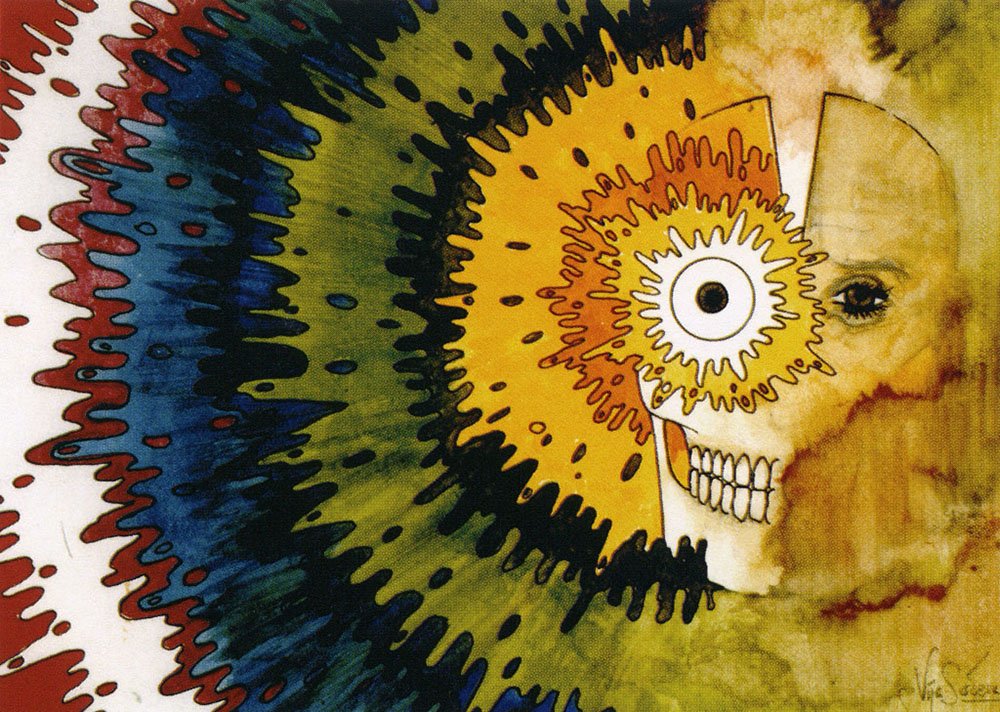 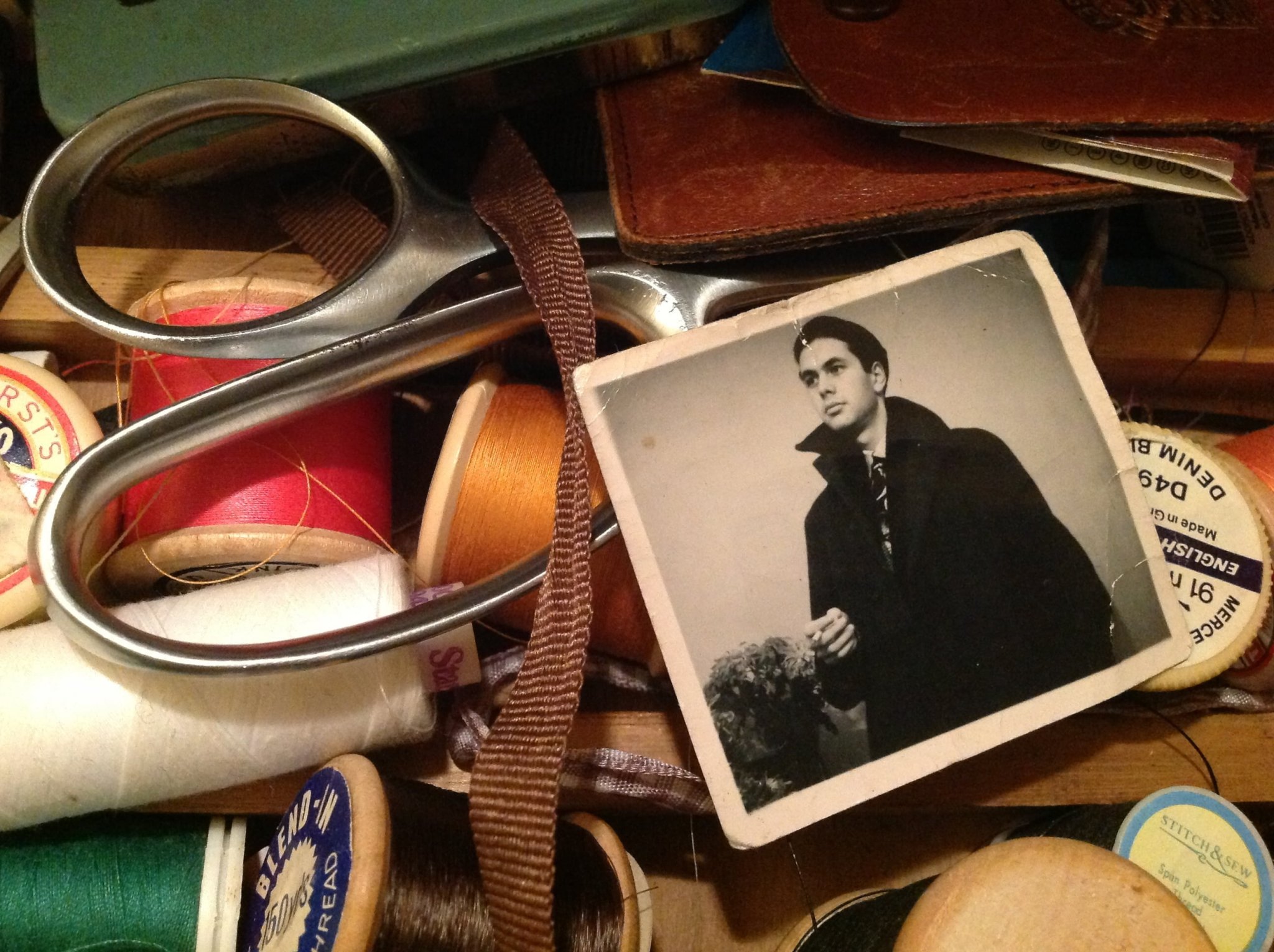 There’s a man in my mum’s sewing box. Staggeringly handsome and, until recently, rather mysterious. I hadn’t expected to be writing about a mystery again quite so soon after learning of the woman who may have been the face of Resusci Anne, but today I’m back with new Cochrane evidence which takes some of the mystery out of medicines for migraine, plus a look at migraine art and the man behind it. The man whose face has nestled among the cotton reels for the past sixty years.

Migraine is a common, complex and potentially disabling condition. Now we have new evidence from six Cochrane reviews on different drugs used for migraine, two on treating acute migraine and four on preventing episodic migraine in adults. Firstly treament, and two classes of drugs used to treat it, non-steroidal anti-inflammatory drugs (NSAIDs) and triptans.

Two new reviews have looked at the evidence for naproxen, a NSAID, on its own or combined with an anti-sickness drug and combined with sumatriptan, a triptan drug. The first found no randomized controlled trials (RCTs) of naproxen with an anti-sickness drug, but six good quality RCTs with around 2,700 people provides a comparison between naproxen, 500mg or 825mg doses, and placebo (a dummy pill). Naproxen was only slightly better than placebo at relieving migraine headache and it doesn’t look very useful. Two people in ten taking naproxen went from having moderate or severe pain to being pain free after two hours and one in ten taking placebo. Almost five out of ten people had some headache relief with naproxen and three in ten with placebo.

Twelve good RCTs with around 9,300 people provided evidence about sumatriptan plus naproxen, which was much better than taking naproxen alone, though it’s not clear whether it’s better than sumatriptan on its own. About half those taking sumatriptan (50mg or 85mg) plus naproxen (500mg) were pain free after two hours compared with two in ten people taking placebo, when the pain was mild at the start. With more severe starting pain, six in ten taking the combination had only mild pain or none after two hours compared with three in ten taking placebo. Results were similar whether a 50mg or 85mg dose of sumatriptan was taken. Treating early while the pain was still mild was more effective than delaying. There were more adverse effects with sumatriptan plus naproxen than with placebo or naproxen alone but they were mild and mostly didn’t stop people taking it. Where they could be directly compared, the two drugs together were better than either alone, and side effects were more common with naproxen than sumatriptan. 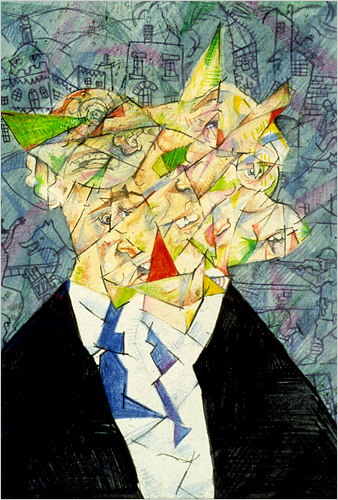 From the Migraine Art collection

So what works in preventing episodic migraine in adults, classed as migraines occurring on fewer than fifteen days per month? Anti-epileptic drugs are often used for this, including valproate (valproic acid or sodium valproate or both), gabapentin and the related drugs pregabalin and gabapentin enacarbil, topiramate, and four reviews published in June have looked at these.

There were some problems with the design and reporting of the ten trials included in the review of valproate but the reviewers conclude that valproate is effective for migraine prevention and well tolerated, though it should be noted that it has been associated with birth defects so may not be safe for women who are pregnant or likely to conceive.

The review on topiramate found good evidence to support its routine use in preventing migraine, with adults taking topiramate having fewer headaches (1.2 fewer per month compared with placebo) and tolerating it reasonably well, with side effects fairly common but mild. Again caution is urged for women of childbearing age – it has been associated with birth defects and may make low-dose hormonal contraception less effective. As one would expect, it had a positive effect on quality of life too. There was some evidence on comparative doses which suggests that 200mg is no more effective than 100mg. The reviewers highlight a need for future research to compare topiramate with other drugs and with other, non-drug options. Those included in this review were not able to provide clear answers, though it was interesting to see that the trial comparing relaxation with topiramate found that relaxation was more effective in improving migraine-related quality of life.

By contrast, the review on gabapentin found that neither gabapentin nor gabapentin enacarbil were helpful for preventing episodic migraine and side effects (especially dizziness and sleepiness) were common. The review included three unpublished and previously confidential drug company reports, six trials in all. There was no published trial evidence on pregabalin. Another review looked for evidence on the effectiveness of anti-epileptic drugs other than gabapentin, pregabalin, topiramate, and valproate for episodic migraine in adults but the limitations of the evidence from ten studies of nine drugs mean that no conclusions can be drawn with any confidence.

So who was the man in the drawer? In the course of one month in 1951, my mother met the three most significant men in her life: her two husbands, whom she married 22 years apart, and the man in the photo, Derek Robinson.

A chance encounter at a youth hostel was followed by two years of happy times before they parted and we had no idea what Derek had done with his life until earlier this year, when I discovered his work in migraine art, a concept he created back in 1973. Whilst working for the pharmaceutical company Boehringer Ingelheim and searching for images to promote a new drug for preventing migraine, he was introduced to a woman who made paintings and sketches to help her doctor understand her migraine symptoms and came up with the idea of asking others to illustrate their experiences of migraine through art. In the 1980s he organized four Migraine Art competitions, sponsored by the Migraine Action Association (then the British Migraine Association), and the response was overwhelming, with over 900 pictures being submitted. Derek managed the collection as its curator until his death in 2001. Migraine Art spawned Headache Art and has spun out across the globe, with competitions and exhibitions continuing to explain and inspire. 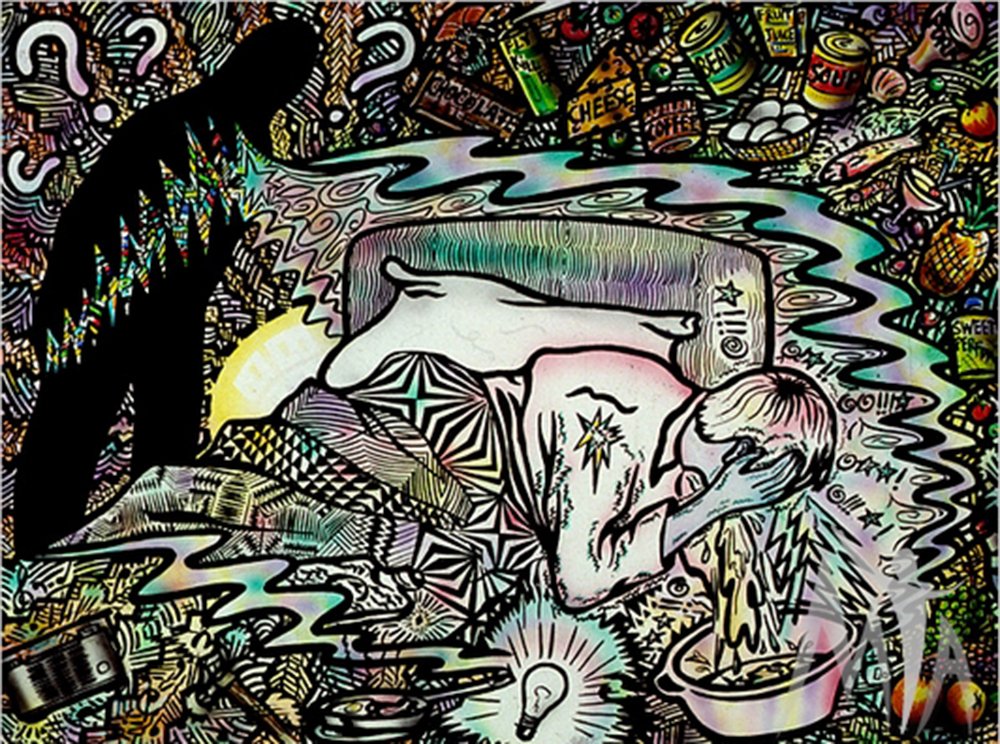 From the Migraine Art collection

Images are from the Migraine Art collection, Migraine Action