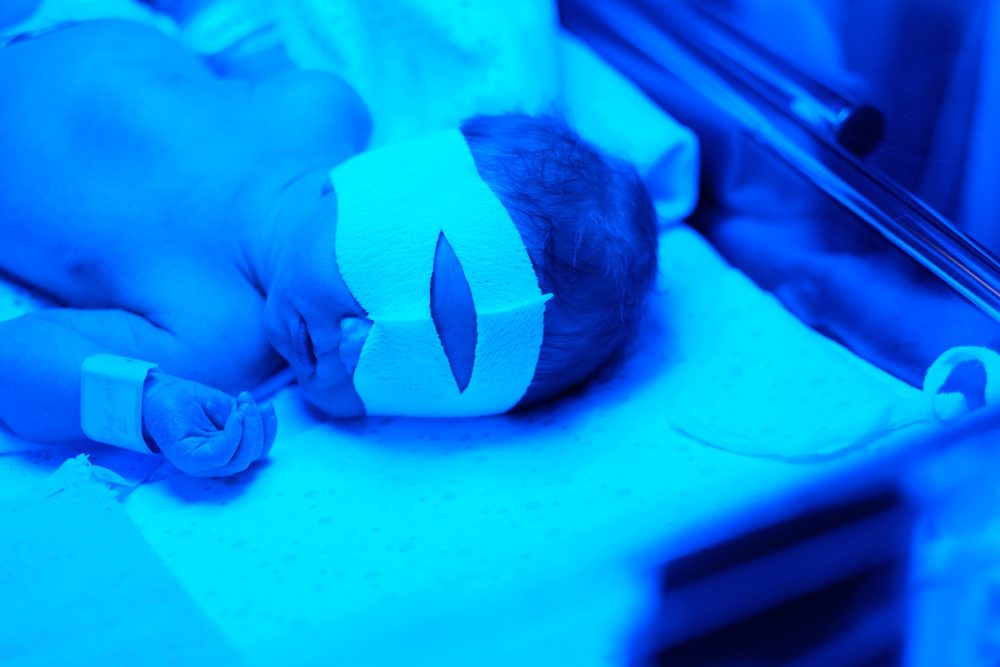 In this blog for health professionals caring for neonates with jaundice, Katie Westwood, Paediatric Registrar, looks at  Cochrane evidence on the prevention and treatment of jaundice in neonates. 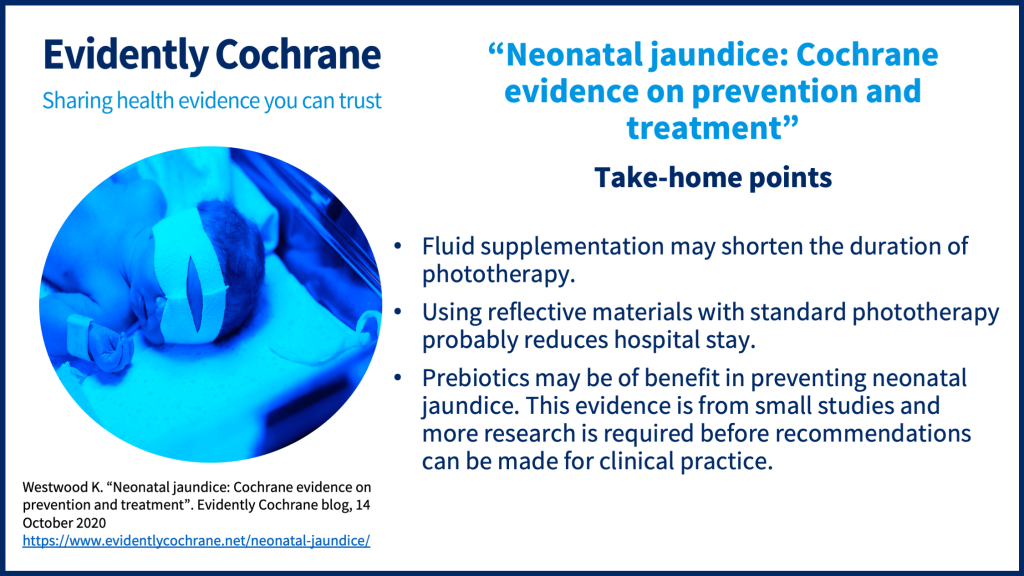 One of the first things parents usually ask me when their newborn is being treated for jaundice is “when can I go home?”. The thing most mothers wish for after delivering their new baby is a good shower and their own bed, and getting out of hospital as soon as possible was certainly a priority for me after having mine! Both of my children were jaundiced in the first week of life but thankfully did not need any treatment.  The prevention of jaundice, and effectively treating it when it occurs, not only reduces the risk of kernicterus, but may allow a baby to be discharged more quickly, with a lower risk of readmission, to enjoy time at home as a new family.

Jaundice is a common problem occurring in 25-50% of term newborns, and to a higher level in preterm infants (Kumar, 2011). In most cases it is benign and transient, but can cause kernicterus and irreversible brain damage if severe. Jaundice is a normal physiological process resulting from the lysis of red blood cells, reduced ability of the liver to metabolise bilirubin and increased enterohepatic circulation. There are many risk factors for pathological jaundice including blood group incompatibility, glucose-6-phosphate dehydrogenase deficiency, prematurity, instrumental delivery and non-optimal breastfeeding.

Phototherapy is the mainstay of treatment for jaundice to reduce the serum bilirubin and prevent bilirubin brain toxicity, with exchange blood transfusions used more rarely for very high or treatment-resistant levels. It follows that prevention and effective treatment aims to reduce the harmful effects of jaundice on newborn babies and the duration of hospital stay, beneficial to families and the NHS as a whole.

Although phototherapy does not appear to cause serious side effects, some recent animal and cell culture studies have raised concerns regarding its potential to damage DNA (Armanian, 2019). Other studies have found increased oxidative stress markers in infants undergoing phototherapy, increased risk of childhood cancer and phototherapy has been found to be a risk factor for breastfeeding failure (Van Rostenberghe, 2020). It is important, therefore, to investigate ways to prevent and treat jaundice to reduce the need for, or duration of, phototherapy.

The theory underpinning the use of prebiotics to prevent jaundice is that prebiotics promote the growth of beneficial bacteria in the colon and some have an additional laxative effect. This results in a change in consistency and frequency of defecation. When bilirubin is evacuated faster there is reduced enterohepatic circulation and less jaundice.

A Cochrane Review on prebiotics for the prevention of hyperbilirubinaemia in neonates (published August 2019), comparing prebiotics with enteral supplementation of milk with water/placebo or no supplementation, includes three small studies with a total of 154 preterm and term infants. The evidence is low-certainty and the review authors conclude that “current studies are unable to provide reliable evidence about the effectiveness of prebiotics on hyperbilirubinaemia”.

In infants supplemented with IV fluids compared to oral fluids, there is probably little or no difference in the bilirubin levels (moderate-certainty evidence). There were no adverse events in either group.

There is no evidence that IV fluid supplementation affects important clinical outcomes such as bilirubin encephalopathy, kernicterus, or cerebral palsy in healthy term infants, mainly because the risk of developing these was low in this population. IV fluid supplementation may result in differences in bilirubin level at certain time points but not others. The clinical significance of this is uncertain.

Use of reflective materials during phototherapy

Reflective materials such as white cloth, mirrors and aluminium foil reflect dispersed phototherapy light and are a potentially inexpensive and easy intervention.

A recent Cochrane Review (published July 2020) looks at the use of reflective materials during phototherapy to increase the light intensity on the infant’s body. It includes 12 studies of term babies. The review authors conclude that reflective materials probably reduce the bilirubin level more than phototherapy alone in the first 4-8 hours of treatment (moderate-certainty evidence), which is arguably the most critical time in the management of jaundice. They are uncertain whether there is a faster reduction in the bilirubin level over the first 24 hours of treatment and a shorter duration of phototherapy when reflective materials are used as the certainty of the evidence is very low. The duration of hospital stay is probably reduced by using reflective materials with phototherapy (moderate-certainly evidence). One study in this review reports that standard phototherapy with reflective materials performs similarly to double phototherapy. There was concern that curtains could obscure the view of the infant and affect nursing observation and mother-infant bonding but the studies did not report any increase in adverse events. None of the studies reported on healthcare personnel or parental satisfaction with curtain use, or their impact on breastfeeding rates.

Using conventional phototherapy for intensive treatment may be difficult due to the inability to place the lamps close to the skin of the infant and the emission of unstable broad wavelength light may cause side effects like glare, giddiness and headache in health care personnel. LEDs are proposed to be superior to conventional phototherapy due to their efficiency,  low heat production and ability to be placed close to the infant without apparent adverse effects and are widely used in UK practice. It is proposed that the high intensity, narrow wavelength band and higher irradiance delivered by LED phototherapy may reduce bilirubin levels more quickly, reducing the need for exchange transfusions and a shortening the duration of phototherapy treatment.

A Cochrane Review on Light‐emitting diode phototherapy for unconjugated hyperbilirubinaemia in neonates (published December 2011) compared the efficacy of LED phototherapy to conventional phototherapy (fluorescent tubes, halogens and fibre optic blankets).  It includes six trials with 640 preterm and term infants. There is high-certainty evidence that there is little or no difference between LED over conventional phototherapy in terms of duration of phototherapy and rate of decline of bilirubin.  Side effects such as hypothermia, hyperthermia and skin rash were rare and were similar between groups.

Phototherapy continues to be central to the treatment of jaundice in newborn babies but there may be some additional benefit from adjuncts such as fluid supplementation and reflective materials. Although there is some evidence that these adjuncts reduce bilirubin levels at certain time points, there is not currently evidence that this translates into a reduction in clinically important outcomes such as kernicterus, although fluid supplementation might reduce the need for exchange transfusion. Duration of phototherapy might be reduced if fluid supplementation is used, which may be clinically relevant in light of concerns about the safety of phototherapy. The duration of hospital stay is probably reduced by using reflective materials with standard phototherapy, which may have important cost implications and improve parental satisfaction. Most of the evidence available through these systematic reviews is of low or moderate certainty. In future, further research to ascertain benefit to a greater degree of certainty would be helpful to guide clinical management.

Join in the conversation on Twitter with @CochraneUK or leave a comment on the blog. Please note, we will not publish comments that link to commercial sites or appear to endorse commercial products. We welcome diverse views and encourage discussion but ask that comments are respectful and reserve the right to not publish comments we consider offensive.

Katie Westwood has nothing to disclose.

Dr Katie Westwood graduated from Cardiff University in 2011 and is a member of the Royal College of Paediatrics and Child Health. She aspires to be a Neonatologist and is currently working as a specialist registrar in Plymouth’s Neonatal Intensive Care Unit. She has a Post Graduate Diploma in Neonatal Medicine and a special interest in infant nutrition. She is a founding member and neonatal lead for PenTRAIN (Peninsula Trainee Research Audit and Innovation Network) and is passionate about making evidence based medicine accessible to all.