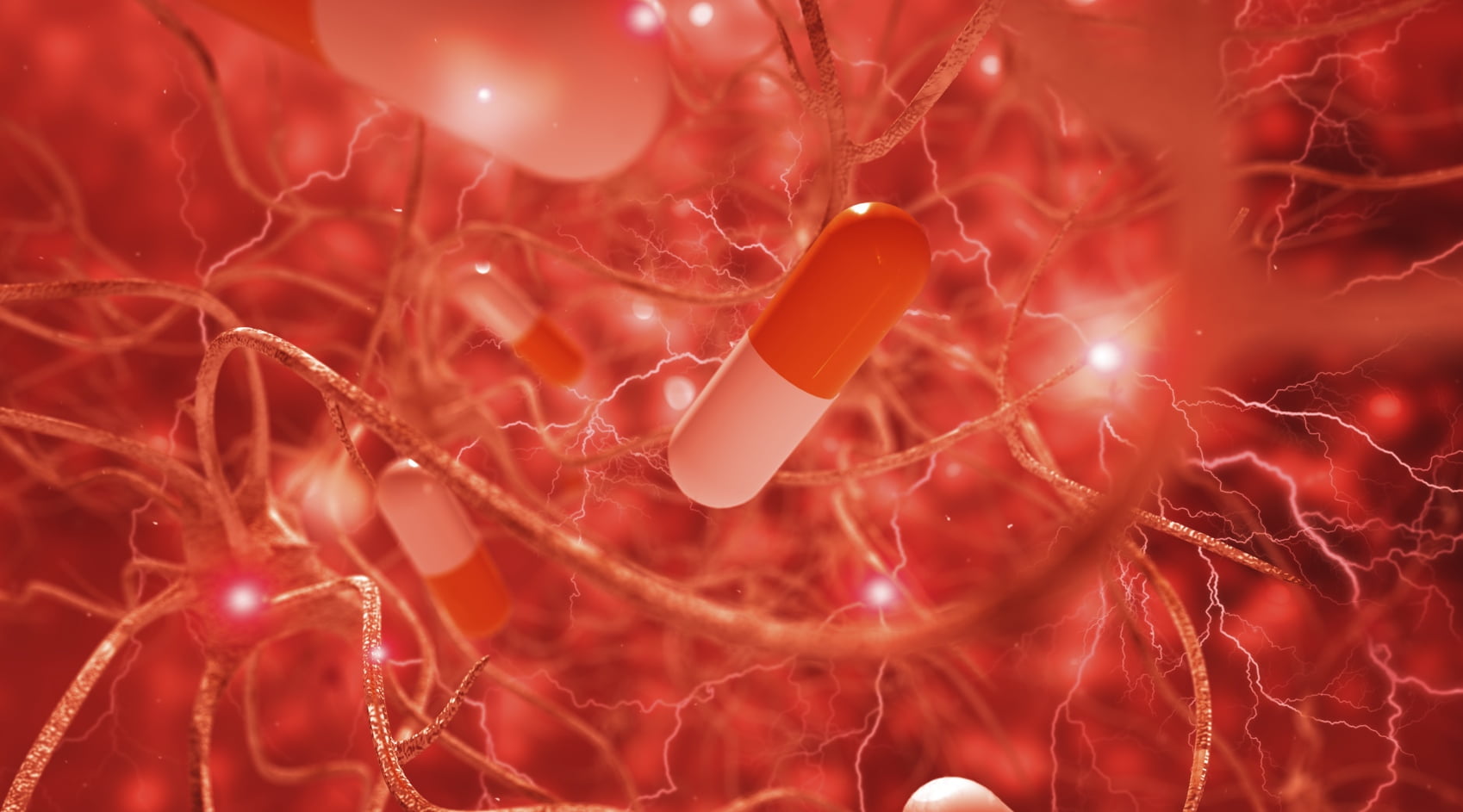 The novel oral anticoagulants – or NOACs – are the new kids on the block in anticoagulation. They appear to be as effective as warfarin but with a better safety profile. A Cochrane review published in June 2015 (1) explores the role of NOACs in the treatment of deep vein thrombosis (DVT).

So what is novel about the NOACs?

DVTs  are conventionally treated with  parenteral  unfractionated heparin or subcutaneous low molecular weight heparin together with warfarin. Once therapeutic levels of warfarin have been reached, as measured by the International Normalised Ratio (INR),  heparin is discontinued. The NOACs comprise direct thrombin inhibitors (DTI) and direct Factor Xa Inhibitors  and were specifically designed to overcome the limitations of warfarin (2). They are given orally, have a predictable effect, do not require monitoring and dosing, and have few known drug interactions.

How do NOACs work?

We need to visit the dustier recesses of our medical student memories to take a look at the clotting cascade. 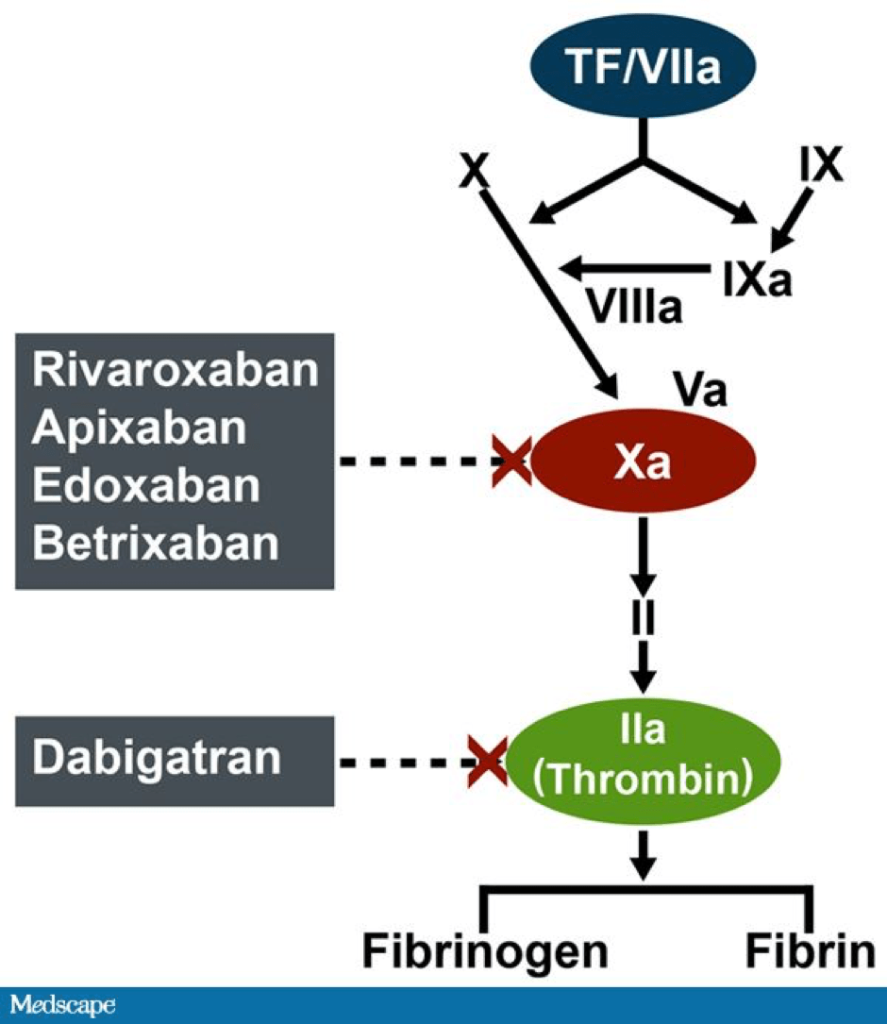 DTIs (eg dabigatran) and Factor Xa inhibitors (eg rivaroxaban) act directly on thrombin and factor Xa respectively, without the need for cofactors such as antithrombin.

How common is DVT?

DVT is not uncommon and affects around 1:1000 people (3). It has associations with various risk factors including immobility, smoking, obesity, surgery, trauma, cancer, thrombophilia, oestrogen in the combined oral contraceptive pill and HRT . Pulmonary embolism occurs in 3-4:10000 people, 70-80% of whom will also have a DVT, although only 15% of these DVTs will be symptomatic.

How effective and safe are NOACs compared to conventional treatment of DVT?

The Cochrane Review, which set out to answer this question, included 11 RCTs, with  27945 participants. 3 RCTS looked at oral DTIs (dabigatran in 2; ximelagatran in 1) and 8 RCTs tested Factor Xa inhibitors (rivaroxaban in 4; apixaban in 2; edoxaban in 2). The diagnosis of DVT was confirmed in each case by standard imaging techniques. The primary outcomes were recurrent venous thromboembolism (VTE) and fatal/non-fatal pulmonary embolism. Secondary outcomes included all-cause mortality, post-thrombotic syndrome (PTS), adverse effects and health-related quality of life.

The studies were found to be of high methodological standard, with high quality evidence and a low risk of bias.

So what conclusions can we draw from these results?

‘NOACs such as DTIs and Factor Xa inhibitors may be an effective and safe alternative to conventional treatment for DVT.’
‘We do not believe that further research will change the results we have presented.’

The studies included in the Cochrane Review were large and of high quality. The National Institute for Health and Care Excellence (NICE) has given its stamp of approval to rivaroxaban (2012), dabigatran (2014) and apixaban (2015) as options to be considered in the treatment of VTE in adults. Edoxaban awaits pronouncement  in August 2015.
NOACs have clear benefits in terms of ease of use and lower risks of major bleeding. Caution must be exercised in people with compromised renal function since the NOACs are all to some extent excreted via the kidneys.

At present there is no blood monitoring test available for NOACs as there is for warfarin. This would be of particular use and relevance, for example, in patients with impaired renal function or those requiring surgery or presenting with major bleeding.
The search is on for an antidote to the NOACs. One hopeful candidate is idarucizumab for reversing dabigatran (4).
It is not yet known what role NOACs have in the treatment of other categories of VTE such as those associated with malignancy and thrombophilia. Further studies are needed to look at head-to-head comparisons of individual NOACs.
A further Cochrane Review is underway looking at the effectiveness of NOACs in the treatment of PE.
NICE has approved the use of dabigatran, rivaroxaban and apixaban for patients with non-valvular AF to prevent stroke and systemic embolism (5).

Treating deep vein thrombosis: novel ways to anti coagulate by Lynda Ware is licensed under a Creative Commons Attribution-NoDerivatives 4.0 International License.
Based on a work at http://onlinelibrary.wiley.com/doi/10.1002/14651858.CD010956.pub2/abstract.
Permissions beyond the scope of this license may be available at http://onlinelibrary.wiley.com/doi/10.1002/14651858.CD010956.pub2/abstract.
The featured image is not available for reuse or republication as it was purchased for Evidently Cochrane from istock.com